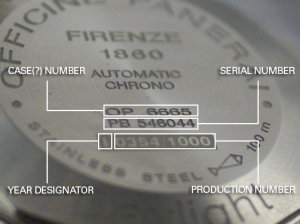 OP attached with a four-digit number represents the Case No. of this watch. Panerai models resemble each other in most cases with little differences. Meanwhile, differences in these figures mean that their cases are of different models. They differ from each other in external appearance and material as well as the internal structure. Even the same model may bear some differences in Case No. in different historical periods.

2) BB XXXXXXX or PB XXXXXXX – reference numbers of watches (as shown in picture number 2)
This group of numbers is the reference of this watch, which is equivalent to the identity card number. For each different watch, this number will be different. In general cases, please avoid making public this number so as not to be utilized by the counterfeiters.

3) A single English character – prefix of the watch (as shown in picture number 3) The prefix represents the year of the watch. The following is some specific information.

A) The rules for the case back of PreV and PreA are quite different, but it is not our focus today.

B) For some watches, there will be an OOR right here standing for Out Of Range which means that this watch is not involved in the normal prefix numbering. Generally, OOR may appear only once for a single watch. Due to its scarcity, product with OOR has a slightly higher price compared with others of the same model.

4) Numbers right behind the prefix number – serial numbers of the watch (as shown in picture number 4)
This number represents the order number of the watch under the prefix in a particular given year. When the model is fixed, these numbers composed with the prefix constitute a unique and definite combination.

5) The number after the slash – the annual total of this model (as shown in picture number 5)
This number represents the total production number of this kind of watch under the prefix in a particular given year. This is a limited edition for Panerai now. Generally speaking, the smaller the number is, the more precious these watches will be, and thus the higher market price they are.
Linking into the following website, you may get some reference information about the productivity of penerai each year.